1.1. The organizers have the right to change the rules in the middle of the season if they deem it necessary.

1.2. In case of violation of the rules, the organizers decide on the penalties according to the seriousness of the violation.
1.2.1. Violations are dealt with on a case-by-case basis.

1.3. Players are allowed to stream their matches themselves. The streamer must mention Nordic Championship in the title of the stream. Server information must not appear in the stream.

1.5. Captains must join the Discord. Players are encouraged to join the discord as well.

2.3. Players register for the Open Qualifiers using the registration form provided by the national organizers.
2.3.1. The team chooses a captain from among themselves who is responsible for communicating with the tournament organizers (for more detailed rules for the team, see section 7 Team).

2.4. You can participate in the league on the following platforms: PC, Playstation, Xbox, Nintendo Switch.
2.4.1 Players must have cross-platform play enabled in matches.

2.5. By registering, the team accepts the schedule and therefore undertakes to play at a time set by the organizer.

3.3 Some matches will be streamed. Admins will contact the teams of the streamed matches.

4.3. Match times and more specific information will be published in www.rlnordic.com

5.1. 8 best teams of the group stage make it to the playoffs

5.2. Playoffs will be played on 13/9. More specific times will be announced in www.rlnordic.com.

5.3. Playoffs are played as a single elimination bracket with a bronze match.

5.4. Playoff series are played as best of five, except the Grand Final which will be best of seven.

5.5. The match-ups of the first round are determined by the results of the group stage.
Example: Group A 1st vs Group B 2nd
Etc.

6.1. The server settings are as follows:

6.4. Players are not allowed to join the team until all players are on the server.
6.4.1. If the game starts before all players have joined the team, the game will restart from the beginning.

6.5. In streamed matches, admins will signal when the first match of a series is allowed to start.

7.1. A team consists of three or four players.

7.2. All players must be citizens of the country they played a qualifier in. Invited teams that already had a Nordic player in the main roster from a different country are allowed to play him.

7.3. A team must appoint a captain.
7.3.1. The captain’s responsibilities include communication with the tournament organizers / game admin and following the game schedule.
7.3.2. RL Nordic Discord has a text channel for the players where important releases about the season are published, the team and captains are obliged to follow the channel.

7.4. Players’ name changes must be notified to admins and approved.

8.1. A match must start with 6 players present in total. If a player does not show up for the match and the substitute is not available at the time, the team missing a player will have to forfeit the match. In extreme circumstances, the match may be postponed if the admins deem it possible.
8.1.1. For streamed matches: If a team does not show up with at least 3 players at the latest 5 minutes after the announced time, they may be penalized for the loss of the first match (in a BO5 series). If the team does not appear on the server within 10 minutes of the announced time, they may be given a loss for the series.

8.3. In case of a player disconnect before 30 seconds have passed and no goals have been scored, the team with the disconnected player has the right to restart the game.
8.3.1. In case of a player disconnect after 30 seconds or if a goal has been scored the match will continue to its full-length. The disconnected player can rejoin, or the team can switch in their substitute.
8.3.2. After a game where a disconnection has taken place, the team has 5 minutes to fix the issue, if the issue is not fixed, the match will continue 2vs3, the player can join in at any time.

8.5. If a team has demonstrably used disconnection rules without an acceptable reason, the team can be penalized at the admins discretion.

8.6. If a player stops playing in the middle of the event without good reason, he or she may be denied entry in the future events.

8.7. Disruptive behavior, such as toxic behavior or other unsportsmanlike conduct, is punishable on a case-by-case basis at the admins discretion.

5000 € in total are spread among the teams as seen below:

Nordic Championships aim to be the highest quality and most entertaining league in the Nordic area. The league is accompanied by a professional team and partners. The league would be nothing without skilled players, but we need each other to make this great league concept possible. This is why it is important that we have a Code of Conduct in addition to the rules:
• Be honest with yourself and each other
• Respect your opponent and teammates during and outside games
• Behave in accordance with ethical and moral principles
• Racism and any reference to racism is prohibited and it is advisable to intervene when it occurs
• Games are played to completion
If violations occur, the player concerned may be sanctioned with a warning or removal from the league. Rule violations may be, for example:
• Rage quitting
• Toxicity, bullying, incitement and defamation
• Cheating and 3rd party software use

Nordic Championship @RL_Nordic
9 months ago
Thanks to @octane_gg for doing stats for our championship! 🙏 https://t.co/w7gHmcwwlw
View on Twitter 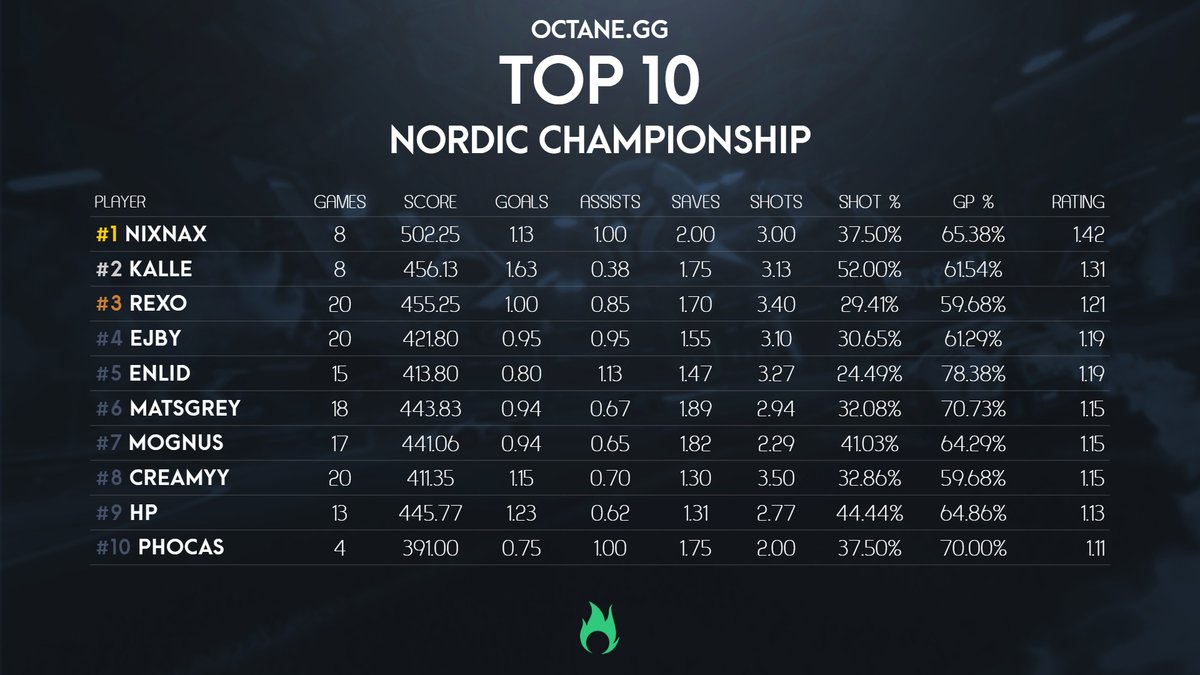 Octane @octane_gg
Stats for the @RL_Nordic Nordic Championship are now available on our website! Here are the top performers of the event: 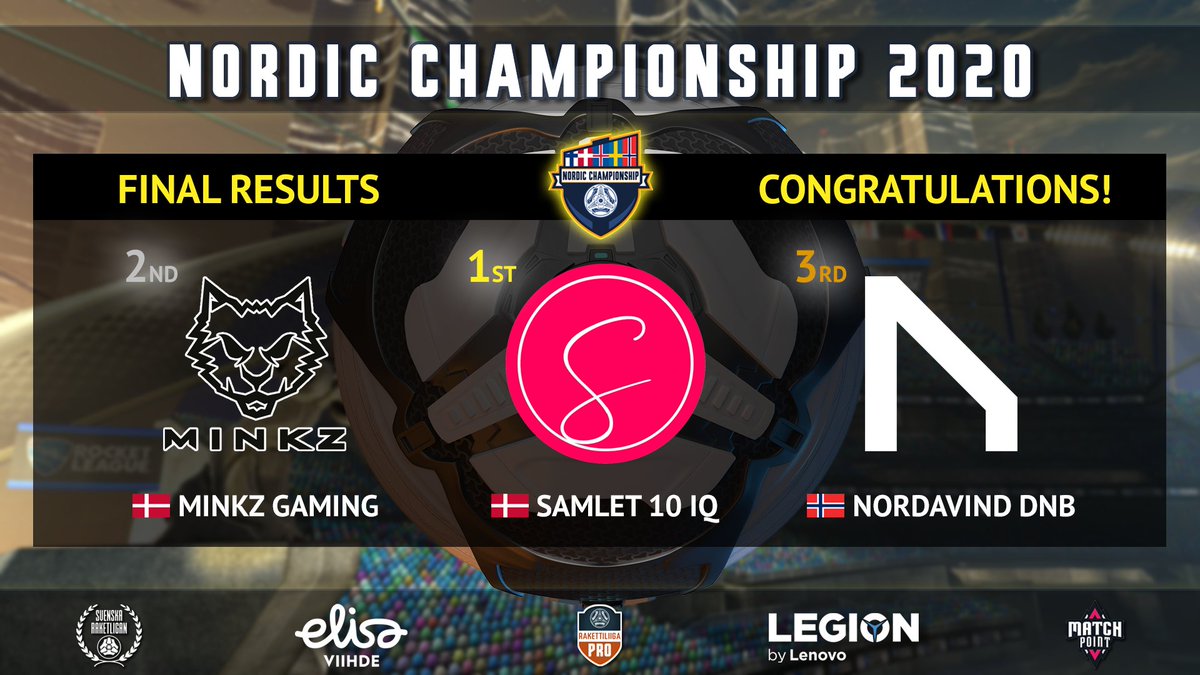 What a performance by Samlet 10 IQ. This is not an upset anymore. This is a statement. Do not underestimate Danish force!! 🇩🇰